Symbolism and history of the flag

From: http://users.aol.com/mpgregor/private/flags.htm this information by Hugh Agnew.

Background of the state flag and coat of arms:
The official coat of arms of the Czech Republic is based on the arms of the lands of the Czech crown in the middle ages. The emblem of Bohemia proper (once it had replaced the Premyslid "flaming eagle" still used in depiction of St. Vaclav) is a white lion with two tails, rampant on a red field. The two eagles represent Moravia and Silesia. The red-and-white chequerboard eagle on a blue field is Moravia, which was referred to by Emperor Frederick Barbarossa as an independent Margraviate in the twelfth century, though it was soon tied firmly to the lands of the Czech crown by the tradition of making the Czech king or his heir margrave. The black eagle on the gold field represents Silesia. Only fragments of the historical territory of Silesia remain in the Czech Republic today, around Opava and Tesin, but all of it came under the Czech crown during the reign of John of Luxemburg and his son Charles IV.
Many European national flags derive from former royal coats of arms, and the Czech one is no exception. Since a complicated coat of arms could not be seen from a distance during a conflict, the coat was reduced to a standard displayed on a lance point, usually (following the customary descriptions of coats of arms) as bars of horizontal colors. So, the Czech kings flew a standard of a bar of white "on" a bar of red, representing the white lion on the red field.
During discussions after World War I over what flag to adopt for the new Czechoslovak State, in the end an adaptation of the Bohemian flag was created, with the addition of a blue triangle next to the staff. This made the flag different from the flag of Bohemia alone (recognizing the fact that not only Silesians and Moravians, but also Slovaks were now supposedly part of the "state bearing" nation). The choice of blue meant that the colors of the flag were now red-white-blue, which in the nineteenth century were considered "traditional Slavic" colors and had been adopted by most pan-Slavic oriented movements (including the Czech Sokol movement) during that time.
Actually as far as I know there is no convincing evidence of their being particularly "traditionally Slavic" before the Russians under Peter the Great began using a red-white-blue banner, which probably came from the flag of the United Provinces of the Netherlands, whose shipbuilding and naval prowess Peter greatly admired. Still, the idea was firmly fixed by the nineteenth century, so the flags of Russia, Slovakia, Czech Republic, Slovenia, Croatia, Serbia and ex-Yugoslavia all made use of these colors for that reason.
When the CSFR broke up in 1993, the Czech Republic by decision of the Czech National Council, now the Czech Parliament, adopted a flag practically undistinguishable from the flag of the Czechoslovak state, while the Slovaks adopted their "traditional" flag, which is horizontal stripes of red-white-blue with the shield (appearing also in the Hungarian emblem, but not in the red-white-blue colors) superimposed on it. The CSFR federal assembly had agreed that neither "successor state" would use any symbols of the federation, but the CNR ignored this resolution, which caused some further resentment among the Slovaks added to all their other resentments, justified and unjustified...

The first Czechoslovakian flag (1918-1920) was identical to the Polish one as these are the colors of Bohemia. I saw once a children school book, in Czech, dating from the thirties, showing such a flag with the comment: 'There are our colors' and besides the Czechoslovak flag with: 'here is the flag of the republic'. During WWII the protectorate of Bohemia-Moravia had the following flag: three horizontal stripes white-red-blue
Jean-François Blanc 31-Oct-1996

Before the separation of Slovakia and the Czech Republic, a resolution was passed by the Czechoslovak government that neither of the two "new" states could continue to use the red white and blue flag of Czechoslovakia. Upon separation, Slovakia adopted the White/Blue/Red flag with the shield of arms in the upper hoist. The "new" Czech Republic adopted the flag of former Czechoslovakia, in direct violation of the resolution mentioned above. Slovakia was ticked off over this, but the Czech folks said "The country that made that rule doesn't exist any more" and refused to change.
Nick Artimovich 31-Oct-1996

The blue of the triangle stand for Moravia, since the Moravian coat of arms is blue with an eagle, chequy of white and red.
Josh Fruhlinger and Harald MÃœller 31-Oct-1996

At this website the image <pic-clinton.jpg> shows the presidents of US, SK and CZ, and two quite large flags of the latter two states. On the photo, the Czech shade of blue seems to be noticeably darker than the Slovak one. Is this a mistake, a meaningless variation, an optical illusion, or is it supposed to be so?
Antonio Martins, 25 Apr 2000.

I think it is mere variation with no constitutional basis. However, historical Slovak flags (e.g. the state flag of Slovakia in 1939-1945) seem to have been rather light blue.
Jan Zrzavy, 26 Apr 2000

Perhaps the change of the shade of blue is also part of a vexi-guerilla nobody noticed ...
Jarig Bakker, 26 Apr 2000

Historically, Antonio's source is not right. The blue triangle is a mere representation of the third Slavonic color (blue-red-white, beginning from 1848), and only secondarily it has been linked with blue colors from the Slovak *and Moravian* coats of arms. The blue triangle doesn't (and didn't) stand for Slovakia (or even for "Slovak mountains") explicitly, it is merely late mythology.
Jan Zrzavy, 26 Apr 2000

As I recall, part of the terms of the "Velvet Divorce" between the Czech and Slovak portions of the old CSFR was that neither successor state would use the national symbols of the federation.  But the traditional Czech white-over-red flag was identical with that of Poland, and the Czechs, following the path of least resistance (in the tradition of the Good Soldier Svejk), just decided to leave well enough alone, adding yet another to the long list of Slovak grievances against Prague.
Joe McMillan, 26 Apr 2000

The artistic rendition was slightly different from the present one. The author of the 1990 COAs was Joska Skalnik (he also authored the 1990 Czechoslovakian COA), according to Jiri Louda's proposals. AFAIK, the *present* COAs are authored by Jiri Louda himself.
Jan Zrzavy, 4 May 2001

Anyone know what the colors on the Czech republic flag represent? Why the isoceles triangle?
Pat B., 23 May 2001

Nothing. They are simply Bohemian traditional color (white and red, derived from the silver lion on the red shield), plus the third Slavonic color, the blue, present also in Moravian (and Slovakian) arms. The bicolore-triangle flag pattern was selected merely to produce a flag that would be easily recognizable (note that many white-red-blue tricolores existed and still exist).
All other "explanations" are additional myths.
Jan Zrzavy, 23 May 2001

Here is some additional information on the Czech national flag, extracted from "Le drapeau tcheque - ceska vlajka" by Guillaume Narguet, Radio Prag, 2 April 2005.
On 30 March 2005 the 85th anniversary of the adoption of the State arms (státní znaky) and the Czech flag (česká vlajka) was celebrated by the National Assembly of the Czechoslovak Republic. The author claims that the flag is sometimes used upside down and gives a few mnemotechnic tricks to remember that white should be on top of the flag: adults are told that froth on bier lays always on top, whereas children are told that when painting the flag the red paint would run down to the white part if placed on top.

For the Czech Republic: PMS 192 red, 287 blue. The vertical flag is the horizontal version reversed and turned 90 degrees anti-clockwise - blue at the top, white to the left
Ian Sumner, 11 Oct 2012

The Constitution of 1990 set up the Czech Lands and Slovakia as two equal nations. Each was to have its own arms, seal, flag and anthem, and these were laid down in laws of 1990. The Czech Republic adopted a greater and lesser coat of arms and the flag of white over red on 13 March 1990. The Slovak Republic legislation was dated 1 March 1990, and laid down the arms (almost identical with those of pre-Communist era), the flag (the plain tricolour), seal and anthem. The flag of the state was unchanged. As indicated before, the agreement was made by two countries upon separation not to adopt the previous state's emblems, but CZ adopted flag with blue triangle as the flag of CZ republic on 17 December 1992. So the white-over-red flag was official flag of CZ from 13 Mar 1990 to 17 Dec 1992. I have no idea how much this flag was used. When I was in Prague recently I got a feeling that this w/r flag is not much remembered by the citizens, and many were surprised on mentioning it.
Željko Heimer, 1 Nov 1996

There are not many people in Czechia who know about the Protektorat flag or even about the oldest white-red flag. The flag enacted in 1990 is the same case. People considered the Czechoslovak flag as theirs for more than 70 years and the 1990 flag was never actually used. Another essential thing is that our common state was Czechoslovakia, not Czechia and Slovakia. That's why the Czechoslovak flag was generally more popular. The Slovak flag of 1990 became to represent the separatist tendencies of some Slovaks, besides the others were still using the Czechoslovak one that represented the unity.
Jan Kravcík, 14 Jun 2000

1. The 1990-1992 flag is correct and Tomas only illustrates the fact that most Czech people did not know flag of the Czech Republic within Czechoslovakia. It is his/their problem.
2. The name "Czechia" is recommended to be used by the Ministry of Foreign Affairs of the Czech Republic as a shorter name in English. ("Tschechien" in German, "Chekhiya" in Russian, and "Česko" in Czech. The last name is progressively more and more used in Czechia, predominantly by younger people.)
Jan Zrzavy, 26 Apr 2000.


Here are two images confirming the use of the bicolour both as the flag of Czechoslovakia between 1918 and 1920 and Czechia within the Czech and Slovak Federal Republic. 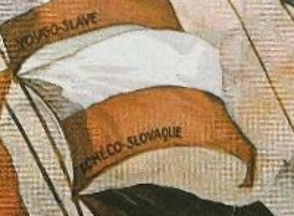 The first comes from the French magazine L'Illustration and was published in 1919. The illustration shows the flags of all the allies and among them a white-red bicolour for Czechoslovakia.
Source: Československá státní­ a vojenská symbolika (Czechoslovak state and military symbolism) by Zbyšek Svoboda. 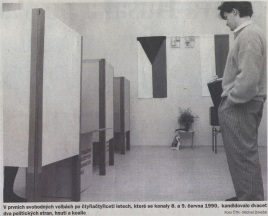 The second is a photo from the 1990 elections showing the Czech and Slovak arms and flag alongside the Czech arms and flag, the bicolour. According to the source  the idea of separate Czech state symbols were considered in 1968 but were scrapped thanks to the Warsaw Pact invasion of Czechoslovakia and the ensuing normalization. The flag and arms were finally approved 01.03.1990.
Source: http://vexilologie.kvalitne.cz/Symboly.htm - The photo is sourced to Michal Doležal of the Czech News Agency.
Kryštof Huk, 7 Aug 2016.