The FOTW Official Flag was chosen by the members of FOTW mailing list among eleven proposals. It was drawn by Mark Sensen who describes it as follows:

White on the hoist stands for peace, blue on the fly for progress. The six colours of the stars are the main colours used in flags. The stars help to make one bigger symbol. The way the stars are all connected to each other represents the Internet. 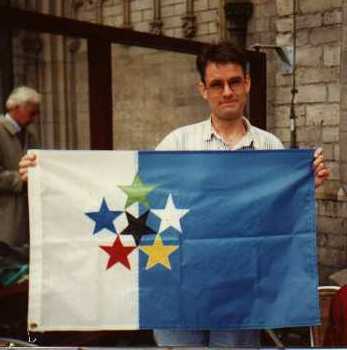 Photographed by Bruce Berry in Amsterdam.


The other proposals for FOTW flag were:

Here is the text of the announcement by Giuseppe Bottasini on 8 March 1996:

The FOTW flag follows the general rule that the upper hoist keeps its place as explained elsewhere on this site.
Mark Sensen, 5 July 2001

I would like to start this new year by sending you a flag-related present, i.e. a proposal for a FOTW burgee. This is just a 3:5 version of Mark Sensen's official FOTW flag.
Ivan Sache, 1 January 2002

Some people have noticed the pentagon described by the outer five stars on our flag. Questions have been asked about the significance of the pentagon.  We asked the flag designer, Mark Sensen, who replied:


To tell you all a little secret: after I designed my proposal I discovered the pentagon in the stars. I was thinking about adding an extra explanation, since the predecessor of the Internet was an idea from The Pentagon. (For those who know the history of the Internet better: correct me if I'm wrong). But I decided to stick with my explanation as intended. 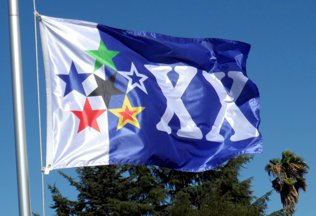 This year, 2014, FOTW celebrates its 20th year of presence on the internet. This bidecadal flag was designed by Pete Loeser, based on Mark Sensen's flag, and using elements from both suggested flag designs by Clay Moss, and Peter Hans van den Muijzenberg.
Rob Raeside, FOTW Director, June 2014

Esteban Rivera suggested we find a way of recognizing the 20th year milestone. An impromptu 20th Year Flag "brainstorming" session began on the FOTW Mailing List the very next day. Two designs were submitted in May for discussion by Clay Moss and Peter Hans van den Muijzenberg. Peter's design, based on a theme: "Two decades under-way to the first jubilee"”, was super, but I also liked Clay°s suggestion with the Roman numerals for 20 incorporated with elements of Mark´s original design. So I simply took the elements I liked from both their designs and mixed them together. I tried to make Clay´s "Xs" a little less southern cross-like, and Peter's fimbriated stars more pronounced by enlarging the star pattern. My design was presented and displayed as part of the program at NAVA 48 in New Orleans.
Pete Loeser, 10 October 2014

Want some FOTW icons for your computer?

People have requested they be able to obtain small gifs of the FOTW flag to use as links to FOTW for their computers. Here are three sizes for you. Click on any one of these to download it:

Click here to obtain an .ico file. To use the .ico file, fotw.ico, place this anywhere you like (inside the FOTW directory would be appropriate), and use the "Change Icon" function to point to it.
by Alvin Heims, 4 March 2001

Alternatively you may prefer these unfurled flags:

Others have already provided the procedure, but I wanted to share this icon with you. I use is both as a desk-top icon (32x32 px) and as small icon in the taskbar (16x16px). Click here to obtain an .ico file.

Alternatively, you can link to Flagspot, which has provided an icon that can be used with FOTW mirrors.  If you aren't familiar with favicon files, they are the custom images you see when you save an Internet Shortcut in newer versions of most browsers. This image should be placed in the root directory of the FOTW website.
Provided by Jim Popovitch, 11 November 2001

I've made a collection of flag icons for Mac OS X, available for download at: http://xicons.macnn.com/designer.php?id=148. Hope there are some Mac users here on FOTW who can enjoy them.

I am sending an FOTW icon image that I have been using as a desktop icon for the FOTW site. How does one get the icon to appear in the favorites list? Please feel free to use the image for FOTW.
Edward Mooney, 19 August 2002

Click here to obtain this image as a .ico file.

To use it (assuming Internet Explorer):

Well, normally, you get them to appear in the favourites list by bookmarking a web site or page that has one already associated with it. It's probably possible to change a favourite whose icon you like to make it point to where you want to point a favourite, but that will most likely suffer from Internet Explorer cleaning up from time to time.

But, what you do to add your icon to your bookmark permanently would basically be:

Want to use a flying flag as your screensaver?

You can include a flag as your screensaver using MS Windows 3D Flying objects/Textured Flag screen saver (available in all versions up from Windows 95 plus).

1. Since the background is black, change to dark grey any black areas of your flag

2. Windows will stretch your image to a square. You can't beat this, so join to it by adding below your flag a black area (real black this time, to match the background). Unless you're using a square flag, of course.

3. The fluttering flag will be shown with the hoist to the viewer's right hand, which is not the way most flags are shown by default. Consider this for vertically asymmetrical flags, but mind different-sized designs, usually showing lettering or maps.