Description of the flag

The flag is white with St George Cross, and a yellow cross with ends pattée - a cross which appears on a gonfanon of William the Conqueror on the Bayeux tapestry. There is also a red ensign, with this cross in the fly.
Pascal Vagnat, 14 March 1996

The gold equal-armed cross overlying the red cross was added to the flag in 1985 to distinguish it from England's. The gold cross also appears in the fly of the Guernsey Red Ensign. The Lieutenant-Governor's flag is as Jersey's except that Guernsey's arms are distinguished from those of Jersey (and England) by the addition of a golden sprig of leaves issuing from the top of the shield.
Roy Stilling, 14 March 1996

The significance of 9 May is that it is Liberation Day - the anniversary of the liberation of Guernsey (and the other Channel Islands) from German occupation in 1945.
André Coutanche, 20 February 2005

The text of the Royal Warrant for the flag is available at http://www.1204.gg/flag_arms.aspx.
André Coutanche, 24 February 2005

Celebrating the 25th anniversary of the Guernsey flag, the BBC, 15 April 2010, relates the history of the flag, as follows:
"[...]
The flag was adopted to mark the 40th anniversary of Guernsey's liberation from German Occupation during WWII.
[...]
One of the motivating reasons behind the creation of a flag for Guernsey was the confusion that was caused by using the same flag as England. The example of this cited in the Guernsey Tourist Board's 1995 History of the Guernsey Flag was the Commonwealth Games where many competitors came away with the opinion that England was somehow fielding two teams. The flag was designed, after much research, by the Guernsey Flag Investigation Committee chaired by the then Deputy Bailiff  Sir Graham Dorey.
[...]
The flag became official as it was granted a Royal Warrant by Her Majesty The Queen and it was first flown on Liberation Day, 9 May 1985.
[...]"
http://news.bbc.co.uk/local/guernsey/hi/people_and_places/history/newsid_8622000/8622080.stm
Ivan Sache, 15 April 2010

It was said that the yellow cross pattée was copied from the Bayeux Tapestry. Does anybody know if this is true, and if there is an image anywhere? Bruce Nicholls (long time chairman of the Flag Institute) suggested blue balls in the four quarters of the flag, so they may have been part of the Conqueror's flag design also, but his balls were dropped.
Richard Mallett, 15 April 2010

There are dozens of flags on the tapestry. Several have designs which have something similar to a cross pattée on them. The clearest is about 90% of the way along the tapestry, immediately to the right of the perhaps significant words "Hic est dux Willelm." It has the form of a long 3-tailed pennon (carried by a Norman on horseback) with a square towards the hoist containing a gold cross surrounded by four unidentifiable objects all on white, surrounded by a gold border, and with a green and gold area at the fly end. It seems similar to the cross pattée of Guernsey - but given the image reproduction and the vagaries of the original stitching it could just as easily be either similar to the cross of Jerusalem or the arms of Edward the Confessor.
James Dignan, 16 April 2010 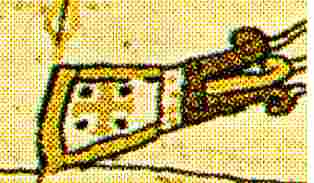 It seems to me that these show well enough the gold cross pattée to answer Richard's original question and to justify its use on the Guernsey flag and ensign. Whether the rich colours we show on the website can be so fully justified, I'm not sure, unless someone can say with any certainty how the dyes used would have faded since new.
André Coutanche, 16 April 2010

Fox-Davies book "The Art of Heraldry" [fox04] describes such a cross as follows: ...not [an] English form of the cross if treated as distinct from others here depicted, though old representations of the cross patée throughout may be found closely akin to [this]."

The Civil Ensign of Guernsey was established at the same time as the flag (15 March 1985) and by the same Order in
Council (30 April 1985) as the Island Flag. The wording of the Order is interesting insofar as it stipulates that usage of the flag when flown by "companies registered in etc...is restricted to vessels operating in waters adjacent to the Channel Islands". In addition, an attached illustration also gives us an overall size for the cross - it occupies three-fifths of flag width.
Christopher Southworth, 19 February 2005

So far as the usage of the ensign is concerned, the wording quoted in the States' leaflet is rather more extensive. It says: "The gold cross of William [the Conqueror] also appears on a special Ensign for use by Guernsey residents who are British subjects. They may fly the Ensign on vessels which are registered or certificated in their own names, regardless of where they sail. Companies which are registered and have their principal place of business in the Island may fly the Guernsey Ensign on their vessels, when operating in waters adjacent to the Channel Islands". I have seen the Guernsey ensign on Guernsey-registered craft in harbours in Greece and elsewhere in Europe.
André Coutanche, 20 February 2005

The wording of the leaflet is not actually at variance with that of the Warrant, with regard to "the Ensign as hereinafter described and blazoned...Gules in the Canton the Flag of the United Kingdom of Great Britain and Northern Ireland and the fly a Guernsey Cross...as in the painting annexed more plainly depicted", it then continues:
"the same to be borne and used and flown by and for our subjects of Guernsey and by and for Companies which are registered in our said Island and have their principal place of business there, all in a manner as is customary and in accordance with the Laws of Arms, always providing that the hearing and use, flying and display of the said Ensign by such companies be restricted to vessels operating in waters adjacent to the Channel Islands".

The above apparently draws a distinction between use by private citizens and by corporate bodies, as does the leaflet, so it would appear that, strictly according to law, an owner may sail his yacht anywhere in the world wearing the defaced Red Ensign of Guernsey, but a commercial ship must change to a plain Ensign when outside the Channel Islands - I wonder if any of the other pre-1995 Orders make the same distinction?
Christopher Southworth, 20 February 2005

According to some sources the 1985 warrant authorised its use only by "vessels operating in waters adjacent to the Channel Islands". I asked Bruce Nicholls who designed the flag if he knew when the area restriction on the use of the ensign by private vessels was lifted, and why it still applied to company vessels.

He replied, "I have not seen the warrant, but the text (para 23) of the Flag Investigation Committee report dated 1st February 1985, forming part of the Billet d'Etat of 13th March 1985, includes the same words as in the website: "regardless of where they sail". In the recommendations of the report (para 30) and in the motion placed before The States by the Bailiff and President of the States, dated 15th February 1985, also included in the Billet d'Etat, the wording has been changed, omitting these words, and reads: "a distinctive ensign, for Her Loyal Subjects of Her Island of Guernsey, and for companies which are registered in the Island and have their principal place of business there, with a restriction that its use by companies be limited to vessels operating in waters adjacent to the Channel Islands". However, the inference clearly is that the restriction on its use to adjacent waters applies only to companies and not to private individuals. I think you'd have to ask the Board of Trade why there is this restriction."

So, it seems, loyal Guernsey subjects have always been allowed to fly the Guernsey ensign "regardless of where they sail".
David Prothero, 23 February 2005

The text of the Royal Warrant for the flag is available at http://www.1204.gg/flag_arms.aspx.
André Coutanche, 24 February 2005

I also have reliable (although unconfirmed by original sources) information that there is a defaced Blue Ensign for Guernsey. I have been advised that it was "adopted by Guernsey at the end of September 1999, and approved by the Secretary of State for Defence later that same year."
Christopher Southworth, 19 February 2005

From Malcolm Farrow's 'Colours of the Fleet':
"The defaced Blue Ensign of Guernsey is a recent, rare and little known flag. The warrant was signed by Dr Lewis Moonie (Under Secretary of State at the Ministry of Defence) on 11th July 2000. It is worn by the SARNIA (a harbour workboat), and LEOPARDESS (sea fisheries protection craft). The defacement is the same as for the red ensign of Guernsey."
David Prothero, 19 February 2005

Both the defaced Blue Ensign and matching jack are authorised by MoD Warrant.
Christopher Southworth, 20 October 2008

The images are from the FOTW-ws gifs originally made by Vincent Morley. I have reduced the length of the flag to give the correct 2:3 ratio specified in the construction sheet. The source is a leaflet published by the States of Guernsey.
André Coutanche, 4 February 2001

Flag used by the Monarch

What flag does the Queen use in the Channel Islands?
James Dignan, 22 March 2004

Even though the Channel Islands are a "Crown Dependency" rather than part of the United Kingdom as such it would appear that Her Majesty still flies the same Royal Standard as she does in England and Wales.
Christopher Southworth, 23 March 2004

Guernsey's coat of arms has a sprig of leaves at the top, as seen on the coat of arms on the flag of the Lieutenant Governor.
Richard Mallett 15 March 2006

The flag is derived from that of the Bailiwick by repainting top and bottom portions of its field into the rainbow colours - not the usual six, but seven stripes, as used in the original seven-striped flag although the colour shades differ somewhat, especially those of indigo and violet. The horizontal arms of the cross seem to be a bit wider than the vertical ones; in addition to that, they are also merged with the bottom red stripe of the rainbow into a single shape.
Tomislav Todorovic, 20 May 2019