According to the very precise construction details contained in the Nepalese Constitution, the proportions of the flag are 4:3 plus width of the blue border (which makes the upper pendant longer than the lower because of its sharper angle).
Christopher Southworth, 13 May 2003

Meaning of the Flag

The flag of Nepal is the only national flag which is not rectangular, being based upon two separate pennants which belonged to rival branches of the Rana dynasty, which formerly ruled the country. The two pennants were first joined in the last century, but it was not adopted as the official flag until 1962, when a constitutional form of government was established.

The moon in the upper part represents the royal house. The sun in the lower part symbolizes a branch of the Rana family, members of which acted as prime ministers until 1961.

The charges are now said to represent the hope that Nepal itself will last as long as the sun and the moon. The style of these heavenly bodies was streamlined on December 16, 1962. The coat of arms still portrays these charges with facial features. Crimson is deemed the national color.

Motto on their coat of arms: "The mother and the Mother Earth are more important than the heavenly kingdom."

Some other attributions have been reported to FOTW concerning the origin and meaning of the flag:


Colours of the Flag

The protocol manual for the London 2012 Olympics (Flags and Anthems Manual London 2012) provides recommendations for national flag designs. Each NOC was sent an image of the flag, including the PMS shades, for their approval by LOCOG. Once this was obtained, LOCOG produced a 60 x 90 cm version of the flag for further approval. So, while these specs may not be the official, government, version of each flag, they are certainly what the NOC believed the flag to be. For Nepal: PMS 186 red, 287 blue. The vertical flag is simply the horizontal version turned 90 degrees clockwise.
Ian Sumner, 11 October 2012

History of the Flag

Prior to the adoption of the present national flag on Dec16 1962, flags with faces were used in Nepal:

Image based on Flags of All Nations:

Information on a more ancient representation of the Nepali flag can be found in MM. Lupant's book:

The first reproduction of the Nepali flag found by M. Lupant is shown in a book published by Perceval Laundon in 1928 (Nepal, vol. 1, pp. 233-236, Constable, London). The flag was crimson with a green border. It was made of two superposed isoceles triangles. The two points could have symbolized the royalty and the Rana family. The moon symbolized the King and the sun symbolized the Rana family. Moon and Sun expressed the hope that the Nation shall live as long as them. The faces are both shown with ears and a symbol in the middle of the forehead (probably one of the coloured spots used by Hinduists, whose name I forget), and the face in the upper triangle has a small neck putting it above the moon.

History of the Nepal flag
Here's little bit about Nepal flag. The national flag of Nepal is the only non-quadrangular national flag. The flag is a simplified combination of two single pennants that represent, for some, the mountains of Nepal while for others the Hindu flags. The flag was adopted, with the formation of a new constitutional government, on December 16, 1962. The individual pennants had been used for the last two centuries and the double pennant since the 19th century.
See also discussion about the Kirat flag.
Dilip Rai, 30 May 2010

Why is the Nepali flag the only non-rectangular national flag?

Probably the answer is easier, if the question is asked the other way round: Why are all national flags (except for the Nepali one) rectangular?
TThe pretty uniform shape of the national flag can be probably explained by the fact that the national flag has its origin in a limited area (Europe and Mediterranean), as ship flags. Certainly there had been different shapes in the early times, but rectangular clothes of an approximate proportion of between 1.5:1 and 2:1 seemed the most practical ones, so the countries "standardized" this shape. Afterwards the ship flags had been adapted for terrestrial use. National flags of countries outside Europe only developed after European national flags had standardized their shape, so they were imitating the rectangular shape as well as some of the symbolic elements (vertical/horizontal stripes, for instance). Older national symbols were transformed to the "European" flag shape, for instance in Ethiopia, where the originally separated red, yellow and green pennants were transformed into a horizontal triband of rectangular shape. Nepal retained the original shape of its flag (basically two pennants one above the other). The first origin of this flag is probably elusive. However, other flags in the Indian area also showed non-rectangular, often pennant-like shape, see in-princ.html#alpha. The Nepali flag is probably the only one surviving, something like a "living fossil". Usually living fossils survive in rather secluded areas, such as Nepal (not having coastal access, and being mountainous) or Switzerland (the same), still sticking to the square shape of its flags.
M. Schmöger, 17 July 2004

The triangular shape reflects the historical shape of flags used by kingdoms on the Indian subcontinent. Even today the flags flown on the masts of temples in India are predominantly triangular.
Armano Grande, 19 March 2008

As far as I can find out the flag of Nepal will retain its current shape, and amongst national flags it is indeed unique. A pennant with its lower edge at right-angles to the hoist, is now obsolete in Western society, but was not unknown in medieval times when it was called a "pavon". Such a shape is, however, still seen in the East - witness the "dhvaja" of Hinduism - but the only other "double pavon" (a term introduced by the Editors of the DoV) I can think of - although there will doubtless be different examples - is the flag of the former Princely State of Dewas, India.
Christopher Southworth, 27 May 2009 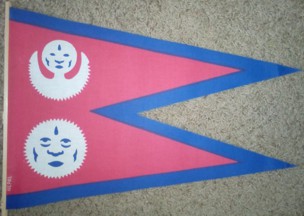 Kingdom-era cotton painted flag measuring around 12x18 inches, the exact maker is unknown but it was supplied to a flag store in Ohio, this variant has differing faces on the sun and moon and a more straight shape.
BlinxCat, 20 March 2022

It was reported on June 13, 2020, that the political map of Nepal was changed by the House of Representatives. The unanimous decision on Constitution (2nd Amendment) Bill No. 2077, also sought to amend Schedule 3 of the Constitution to update the national coat of arms by incorporating Limpiyadhura, Lipulekh and Kalapani in Nepal’s map. It is worth noting that these areas are under Indian administration at the time of the passage of the legislation.
Zachary Harden, 22 June 2020

Nepal has seen political turmoil for some time, the latest developments seeing the King hand over his powers to a parliamentarian government and the government signing a peace treaty with Maoist rebels. Apparently searching for a new national emblem has formed part of these developments. The front page of "The Rising Nepal" newspaper reported on December 18 that a new national emblem "incorporating national unity and people's sovereignty" has been adopted. According to the newspaper, the new emblem "reflects spirit of loktantra marked by inclusiveness and gender parity." The description of the emblem is as follows: "It is round in shape with national flag on the top of its centre encircled by rhododendron, the national flower. Inside the circle lies Mt. Everest, hill, map of Nepal and handshake of a man and a woman. Below the circle reads the Sanskrit verse 'janani janmbhumisch sworgadapi gariyasi' which means the 'mother and the motherland are greater than heaven'."
Three artists are named as the people behind the new emblem: Nabindra Man Rajbhandari, Himalaya Gautam and Krishna Shrestha.
It seems clear, then, that the national flag is not undergoing any changes.
Jan Oskar Engene, 20 December 2006

The coat of arms in use before 30 December 2006 (http://en.wikipedia.org/wiki/Image:Coat_of_arms_of_Nepal.png) consists of a white cow, a green pheasant (Himalayan Monal), two Gurkha soldiers (one carrying a kukri and a bow, and the other a rifle), peaks of the Himalayas, two crossed Nepalese flags and kukris, the footprints of Gorakhnath (the guardian deity of the Gurkhas) and the royal headdress. It also contained the same red scroll with the national motto. This coat of arms was preceded by the Emblem of Nepal.
Source: http://en.wikipedia.org/wiki/Coat_of_arms_of_Nepal.
Esteban Rivera, 20 January 2008

The Royal Nepalese Army, Air Wing, was formed in the mid 1960's and became the Royal Nepal Air Force in July 1979 when it adopted the marking.
Dov Gutterman, 20 June 2004

The national flag serves as the fin-flash for Nepalese aircraft.
Zachary Harden, 12 September 2019

There were no physical flag on the photographs I saw but they were clearly drawn on signs used in different events. So, the Katmandu section has a horizontal triband (red, blue, red), the middle strip being larger and bearing a white open book (with a green cover) and a pen. On the logo of their Facebook page there is a line of text in the upper red strip, written in Nepalese (I guess it is the name of the association : नेपाल शिक्षक संघ). On a sign another flag is drawn : red with a blue border and a yellow six-pointed star in a white circle. The Jhapa section has a red flag with a white open book and a blue pen.
Corentin Chamboredon, 24 May 2020