Uzbekistan was the first central Asia republic to declare its sovereignty and to adopt post-Communist symbols. The flag of Uzbekistan is a light blue over white over light green tricolour, with thin red stripes separating the three stripes. In the upper hoist corner is a white crescent and 12 white stars.

Oddly, although Uzbekistan is a predominantly Muslim country, and the crescent is a symbol of Islam, the symbolism for the crescent moon is described as being representative of the rebirth of the nation, rather than its religion.

The 12 stars stand for the zodiac. White is for peace, green for nature, and red for the life force. The blue stripe stands for eternal night and for water as a fundamental source of life.
Stuart Notholt

Twelve stars are interpreted in two ways: The first one is the most reasonable and logical: there are twelve districts (viloyatlar) in the country and the crescent stands for Islam. The colors of the horizontal tricolor (blue-white-green, with two narrow red stripes separating the white from the blue and green) are interpreted as blue -- sky, white -- justice and green -- hospitability of the Uzbek people. The red stands for strength. The second version interprets the twelve stars as twelve months of the ancient calendar, and white in this version stands for cotton - the monoculture of Central Asia. Sergey Petrov, 1 February 2003

According Znamierowski blue was the colour of Tamerlan's banner and of several Turkish peoples. Tamerlan might be better known in English as Timur. Ivan Sache, 3 February 2003

As an Uzbekistan resident I think that the 12 stars are for the 12 oblasts or villoyets of Uzbekistan. The Karakalpaks have 5 stars for the same reason.
Guy Cosnahan, 17 November 2000

At http://bcc.com.uz/~yamurat/flag.htm we have a SYMBOLIC DESCRIPTION OF NATIONAL FLAG Of Uzbekstan.
António Martins-Tuválkin, 26 September 2002

Construction sheet according Law on state flag of 18, November, 1991 (as published in Official Gazette No. 141 of 28 November 1991). The measures in the legislation are given in centimeters, but since some are end in half centimeters, doubling of those numbers provide a reasonable unit. So:
- Overall flag measures 250x500
- Horizontal stripes 80+5+80+5+80
- Distance hoist - crescent 40
- Rectangle containing crescent and stars 60x150
- Diameter of circle circumscribing each star 12
- Distance between the circles 12
- Distance between horns of crescent to the hoistmost star-circle 7
- The diameter of the outer circle of the crescent is then, of course 60.
Željko Heimer, Christopher Southworth and Victor Lomantsov, 1 September 2002 - 2 March 2003

The protocol manual for the London 2012 Olympics (Flags and Anthems Manual London 2012 ) provides recommendations for national flag designs. Each NOC was sent an image of the flag, including the PMS shades, for their approval by LOCOG. Once this was obtained, LOCOG produced a 60 x 90 cm version of the flag for further approval. So, while these specs may not be the official, government, version of each flag, they are certainly what the NOC believed the flag to be.
For Uzbekistan: PMS 285 blue, 485 red, 361 green. The vertical flag is simply the horizontal version turned 90 degrees clockwise
Ian Sumner, 11 October 2012

by Jens Pattke and António Martins

The photo of the Uzbek Army Standard was made by a friend of mine in Tashkent, Maksim Savochkin. The finial was from the Soviet-era, minus the hammer, sickle and star. The Uzbek flag is in a 2:3 ratio inside the photo
Zach Harden, 11 December 2004

The current coa retains many parts of the old SSR COA: the grain and cotton wreaths, the ribbon (in the national colours now) with inscription, the sun, and even the star: this is, however, an eight-pointed blue star now instead of the communist five-pointed red star.
Marcus Schmöger, 16 September 2001

The refered eight pointed blue star seems to be the symbol "Start of Rub el Hizb", found in Unicode under U+06DE. This is an islamic sign (one more) and is found in other emblem and flags.
António Martins-Tuválkin, 17 December 2002

Coat of arms adopted by Law on 2 July 1992. The bird in the text of Law have the name "Khumo" - symbol of happiness and love to freedom.
Victor Lomantsov, 20 January 2004

The official language of Uzbekistan is Uzbek. Until 1992 it was written with Cyrillic characters and since then it has been written with Latin characters. See the image of Wikimedia (Image by "TilmannR", Wikimedia Commons More information (with current coa image) about the state symbols on the web of the Embassy of Uzbekistan in the United States
Jose Antonio Jimenez Ruiz, 10 July 2019

Here are emblem and flag of the Ministry of Defense of Uzbekistan, adopted 27.11.2018 by Decree of President Shavkat Mirziyoyev.
Valentin Poposki, 13 December 2019

Here is the flag of the Ministry of Emergency Situations
Source: https://www.norma.uz/...;
Valentin Poposki, 13 December 2019

National Olympic Committee of the Republic of Uzbekistan

The flag of National Olympic Committee of the Republic of Uzbekistan is white with logo.
Sources: http://usport.uz/uz/news/view?id=529, http://butsa.uz/news/yangilik_67.HTML.
Tomislav Šipek, 23 April 2018

For Uzbekistan, [cos98] show one of his "suggested" roundels of "classic" blue white green with a crescent charging the inner blue disc. Nevertheless, his suggestion is logical but incorrect. The roundel is in the oposite order of colors - green-white-blue, with thin red rings in the internal borders. There is no crescent. See http://www33.brinkster.com/militaraircraft/mil/5.jpg
Dov Gutterman, 28 June 2004

The Corr.4. of the Album 2000 confirms what Dov Gutterman claims, showing the roundel of blue-white-green (green in the center) with thin red fimbriation between each. A note there also says that the national colours are painted on the fin in five stripes.
Željko Heimer, 26 July 2005

Tashkent - the capital of Uzbekistan 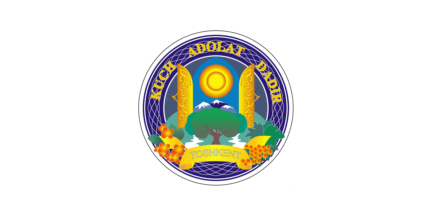 Text from http://www.capitals.e-allmoney.com/asia/uzb.html: "A flag Tashkent the rectangular panel of white colour in which centre the round urban arms are seated is Modern. The coat of arms cities represent round east board of dark blue colour in which centre the arch of blue colour with open gold east collars is possessed. In the arch centre the stylised plotting of three mountain snow tops of dark blue colour and a round gold flat cake over them is seated. Under an arch the green tree a plane tree which trunk is bent around by two white rivers places. On the top extremity of a board gold Latin letters trace the motto «KUCH ADOLAT DADIR» - «FORCE In JUSTICE». In arms bottom the gold arched tape with the city name (letters Latin, grey colour) is represented. The tape ends decorate on the one hand an orange bunch with green leaves, with other - orange flowers of a clap. The flat cake, a clap and grapes personify agriculture, the earth and work; snow tops and a plane tree - the nature of Tashkent. Date of an official confirmation of the coat of arms of Tashkent became on April, 21st, 1909"
Tomislav Šipek, 30 August 2016